What is the Difference Between a Tea Towel and a Kitchen Towel? (Answered)

If you’re like me, I was totally confused about when to use a tea towel and when to use a normal kitchen towel. So, I hopped on the Inter-webs and did a little research and you’ll be fascinated by what I found.

So what’s the TL;DR difference between a tea towel and a kitchen towel? Tea towels are used for dusting and polishing as well as wrapping a loaf of bread rolls to keep them warm. Kitchen towels are ideal for mopping up spills in the kitchen, wiping your hands, wiping off tables, etc.

What Are Tea Towels?

Tea towels have been popular since the 18th century when they first appeared in affluent households. The tea towels were made in really soft linen and were elaborately embroidered to match the rest of the family’s table linen.

Tea towels were used to dry and polish fine and delicate pieces of china and were also used to cover teapots to keep them warm and to shield freshly baked cakes from flies before they were served. Tea towels were also widely used as decorations in the kitchen. Tea towels were particularly popular in countries like England and Ireland where drinking tea was (and still is) a popular pastime!

Over the years, tea towels have changed tremendously as they are now usually printed rather than embroidered and are available in both traditional and contemporary colors and designs. Tea towels can also be bought with designs depicting famous people and places and special commemorative ones are usually available to mark world events such as the Olympic Games and weddings of members of the British Royal Family. The beautiful quality of Ulster tea towels is said to be the finest of all.

The main uses of tea towels.

There are a number of practical uses for tea towels in the kitchen and these include dusting and polishing as the linen is so soft. Tea towels are perfect for using to polish fine crystal glassware, silver ornaments and even pieces of jewelry. In complete contrast, pristine tea towels can be used as food covers, for wrapping a loaf of bread rolls to keep them warm and as napkins.

A pretty ironed linen tea towel is perfect for lining a tea tray. Tea towels are also good for folding and lining the salad drawer in a fridge so that tomatoes, lettuce, and other fruit and vegetables are not bruised. Tea towels can be used to line shelves where glasses are stored to prevent accidental chips and are ideal protective layers between saucepans, casserole dishes and glass serving bowls.

Another great use for a tea towel is stretched across the draining board to protect glassware and china after it has been washed. Many chefs like to place a tea towel under their chopping board to prevent it from slipping.

What are kitchen towels?

Similar in size to a hand towel, kitchen towels were first invented back in the 18th century when they were used for tea ceremonies and also for drying exquisite bone china perfectly. Since then, they have changed in style and have become very versatile – if not an indispensable item in the kitchen.

Kitchen towels are made from a variety of materials, including cotton, terry toweling, and linen. They are available in a whole range of different colors and designs to complement the style and color scheme of your kitchen – or to match your china.

If you have a choice, always choose linen, even though they are usually more expensive in the first place. Linen is much more absorbent than cotton, which is a primary concern if you are doing the washing up! You definitely need a cloth that will dry glasses, cutlery, and dishes quickly. As linen is more absorbent, another advantage is that it is less likely to leave any streaks on items.

To ensure that your linen kitchen towel does dry your washing up really well, use hot soapy water, then rinse all the items in clear hot water before leaving to drain for a few moments. The first items to dry are always the glasses as nothing beats a beautiful gleaming and smear-free glass. Once all the glasses have been dried and polished, dry your cutlery next and after that, all the plates and bowls. To ensure good hygiene, it is essential to change your kitchen towel very frequently – every two days at least.

Linen kitchen towels are beautifully smooth so they do not catch on any precious items like crystal wine glasses, delicate items, and fine china. The second major advantage over other types of kitchen towels is that as well as being smooth, linen does not shed any lint (fluff) – which is a real bonus, especially when you are drying glasses as any fluff is so noticeable.

Kitchen towels are great for many tasks in the kitchen.

Kitchen towels are ideal for mopping up spills in the kitchen as they are so absorbent. They can be useful for cleaning kitchen worktops and gathering up crumbs. Kitchen towels can be used successfully as oven mitts – proving you fold them over a number of times to increase the thickness, Check that your folded kitchen towel will not let the heat through before you try to lift a tin or dish from the oven. Kitchen towels are also ideal for wrapping around hot panhandles and to hold hot pan lids.

Many people have several tea towels on the go in the kitchen at any one time. Many have both linen cloths which they reserve for wiping up and terry toweling cloths which are perfect for drying hands quickly and for carrying hot items. Toweling kitchen towels are also perfect for patting dry herbs and drying washed fruit.

Caring for your tea towels and kitchen towels.

The main disadvantage of both tea towels and kitchen towels is that they will need to be washed very regularly. Having said that, if they are speedily popped into a bowl of warm water with eco-friendly washing powder/ liquid and left overnight, they will look as good as new by the morning.

It is important to change both types of towels at least every other day and to wash them well. Always keep a supply of clean tea towels and kitchen towels close to hand when you are working in the kitchen.

It is best not to use fabric conditioner when you wash either towels as this creates a water-resistant layer on your cloths – which will make them less absorbent. Try not to tumble dry them either as this can weaken the fibers of the cloth. It is far better to let them dry naturally – preferably outdoors. If you want tea and kitchen towels that dry quickly, once again, linen is the best material to choose for both. If you care for your tea towels and kitchen towels well, they will last you many years.

If you are buying new tea towels, the good news is that linen is a sustainable material. If you are planning to replace your kitchen towels, don’t choose plain cotton ones as too many pesticides are used in the cultivation of cotton. Watch out instead for kitchen towels made from organic cotton as no pesticides will have been used in their production.

Other good choices of material for kitchen towels include hemp and linen as these are both more sustainable than conventional cotton.

Get More Inspiration For Your Kitchen

22+ Coffee Bar Ideas You Can DIY This Weekend

What To Know About Installing A Mirabelle Kitchen Sink

The Top 3 Granite Countertop Trends to Watch in 2022

The Best Bamboo Cutting Boards (and why you need one)

Common Questions About Your Kitchen

What Color to Paint Kitchen Cabinets with Grey Walls? 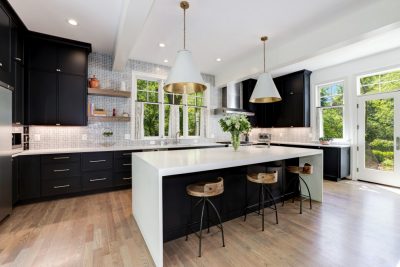 How Tall Should Bar Stools Be?

Do You Need an Exhaust Fan in Your Kitchen?

What is Cabinet Refacing?

Are Dark Kitchen Cabinets in Style?

Is It Worth It to Reface Kitchen Cabinets? Is It Cheaper Than Replacing?

What To Know About Installing A Mirabelle Kitchen Sink

Can I Use Kitchen Units/Cabinets in Bathroom?