As a homeowner, you’ve likely wondered, “What is a crawl basement?” It’s easy to get confused between Crawl Spaces and Crawl Basements.

A crawl basement is an area underneath your home’s first floor that has a very low ceiling height. It can be accessed from within the house via stairs or a ladder. It gives access to pipes and wiring for the house and can be used for storage. Crawl basements provide enough area for someone to crawl around but not enough ceiling height to stand up.

What is the difference between a Crawl Space and Crawl Basement?

What Is a Basement?

The answer to this question might seem obvious to some. But, there are some notable factors when it comes to basements over crawl spaces.

Here are some basement quick facts:

In general, a basement is a combination of concrete slab foundation and crawl space. You need concrete to sit underneath the floor of the basement (like a slab). And it provides room in which to move (like a crawl space). Hilly landscaped areas often use basements in their construction. This is due to the natural up-and-down nature of the plots of land themselves.

What Is a Crawl Space or Crawl Basement?

A crawl basement has functionality between traditional basements, crawl spaces, and slabs. Let’s understand how a crawl space works, as well as its cousin, the crawl basement. It’s important to get a solid sense of what a crawl space actually is and why they’re used in modern homebuilding.

Why Do Contractors Build Crawl Basement and Crawl Spaces?

As the name implies, a crawl space isn’t very big. It’s not intended to do a whole lot, but when you need it, they can come in handy. For this reason, homeowners often prefer to opt for a small crawl space over having a slab and no open space at all. A crawl space lets you get to your plumbing pipes, electrical wiring, and HVAC ductwork. It’s much easier than if you had no open space underneath your home. This means that maintenance issues can get handled in a direct and efficient way.

Additionally, crawl spaces can offer more air circulation and ventilation for a home. This is especially helpful in warmer climates.

What Are the Drawbacks to Crawl Basements?

Crawl basements and spaces have some notable downsides including:

As you likely noticed, most of these drawbacks come right on back down to a single word: moisture.

How to Keep Moisture Out of Crawl Basements

If your house has a crawl space or a crawl basement, you’ll want to keep an eye out for excess moisture. For one thing, your wiring, ductwork, and plumbing are most likely down there. Navigating a lot of water or moisture damage could pose a threat to the safety of you and your family. Second, while moisture on its own isn’t much of a problem, excess condensation can cause issues. Rotting wood, mildew, and mold can make your crawl basement less than an ideal space to have under your home.

Keep excess moisture, condensation, and water out of your crawl space (yuck!) with a dehumidifier. This sucks out the humidity (aka, air moisture) from the air itself, leaving your crawl basement a dry place once again (not yuck!). Some other ways to defend against excessive wetness and decrease moisture exist. Install your vapor barriers around the perimeter of the crawl area. You can also use sump pumps.

A Sump pump is a device that can be used even when submerged in water — and can get installed in a pit. This is dug down deep within your home’s lowest point and is usually the crawl basement or crawl space. In general, it waits until too much water collects — after something like a heavy rainstorm. When this occurs, the dirt and soil near your home can get saturated with moisture (in a word: waterlogged). This excess water flows down to the sump pit, filling it full of water. Finally, the sump pump lives up to its name by pumping out the water from the sump pit and into a safe reservoir. Sump pumps not only keep your crawl basement or crawl space free of water. They can also save your home from flooding!

At the end of the day, a crawl basement functions a lot like a crawl space. Some people use their crawl basements for storage, but most consider them just as a means for easy access to plumbing, electrical, and ductwork.

Get More Inspiration For Your Basement

Common Questions About Your Basement 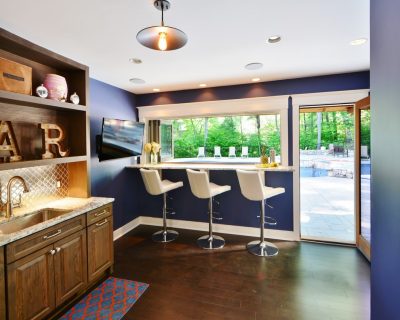 What is a Daylight Basement?

How Tall Should Bar Stools Be?