Should Shower Tiles Go to the Ceiling?

The 4 Benefits of Extending Bathroom Shower Tiles to the Ceiling

Your bathroom remodel is fully customizable, so whether or not the shower tiles should go to the ceiling is completely up to you. Over time paint and drywall can become moldy, discolored, and have a range of other problems from exposure to shower water.

As a whole, most experts agree that shower tiles should go to the ceiling. Tiling all the way up to the ceiling keeps the areas surrounding the shower clean and dry. It also has some visual benefits such as making shower space feel larger and more modern.

Floor-to-ceiling tiles may not be right for every bathroom. Keep reading for the full story on why expert remodelers recommend shower tiles go to the ceiling and when this is not recommended.

Benefits of Extending Shower Tiles to the Ceiling

We could not tell you to extend the tiling all the way to the ceiling without giving you some good reasons why. Consider the following things when deciding whether or not you should extend shower tiles to the ceiling during a bathroom build or remodel.

The area above the shower is going to get wet if you drop the showerhead, the water sprays up mist, or simply the moisture from rising steam.

If that surface is paint and drywall, then it is going to react negatively to the moisture. The paint may peel, corrode, and change colors.

The worst thing that can happen is that the drywall becomes moldy. Mold looks gross and it smells gross.

Shower mold is dangerous for your health so it is important to keep the bathroom as mold-free as possible.

Tiles are made for wet environments and are easy to keep clean.

So extending the tiling to the ceiling can help to promote a mold-free bathroom.

If you want a modern, contemporary-looking bathroom then the shower tiles should go to the ceiling.

Of course, it does not actually make the space larger, but the optical illusion of the long straight lines helps to extend the ceiling and walls visually to make a small bathroom look bigger.

For a luxurious appearance, extending the tiling to the ceiling a must.

Modern, luxury bathrooms usually have floor-to-ceiling tiling for the shower area. Shower tile ideas like this make your space look better and protects your investment by keeping the drywall dry.

It will cost a little more to extend the tiling to the ceiling because you have to pay for more material and the renovator’s time unless you are doing it yourself.

The flipside of this is that leaving the raw tile edge is very unprofessional and it will require edging to finish off the job.

Edging, or bullnose edging, can be just as expensive as it would be to extend the tile all the way to the ceiling, so it is a good trade-off to make. It can actually be more cost-effective to extend tiling up to the ceiling.

One of the reasons why some houses have tiling that stops above the shower is because the builder of the house is trying to save money to stay on budget.

If you are remodeling your bathroom then your goals may be different than a builder who is trying to cut back on costs.

You should go ahead and tile the full shower area while the tile guy is there instead of waiting until later when your paint and drywall are ruined.

It will be worth it to protect your home from the harmful effects of mold and water damage.

When Should Shower Tiles Not Go to the Ceiling?

In most cases having the bathroom shower tiles go to the ceiling is ideal, but that does not mean this method is right for every home.

There are some circumstances when the shower tiles should not go to the ceiling.

Sometimes it is not visually appealing for the shower tiles to extend all the way up. So waterproofing the paint and drywall is a better option. Whether or not tile or paint looks better above the shower is a subjective opinion that could vary.

If the ceilings are extremely high then extending the shower to the ceiling may not be a good choice visually. It would not be cost-effective to add tiling to 12 ft ceilings and it would be unnecessary since the water would not reach that high up.

A professional builder or remodeler will be able to recommend the best options for you. If the ceiling is crowned, then you may want to consider having a carpenter reconstruct the ceiling to be more suitable for the tiling. Otherwise, stop just below the crown.

To the ceiling or not?

For a modern, luxurious bathroom the shower tiles should go to the ceiling. This has numerous benefits aesthetically and functionally.

Tiles are made for wet areas and will be resistant to water damage and mold.

If the area above the shower is paint and drywall it will become moldy and the paint can flake over time.

To protect the bathroom walls from the effects of moisture and mold you should extend the tiles to the ceiling.

Visually, extending the tiles to the ceiling makes the bathroom look more spacious and modern.

Get More Inspiration For Your Shower and Tile

28 Small Bathroom Ideas with a Shower

44 Shower Tile Ideas That Will Modernize Your Bathroom (2023 Edition)

18 Walk-In Showers for a Stunning Bathroom

Common Questions About Your Shower and Tile 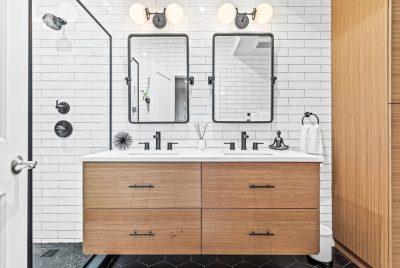 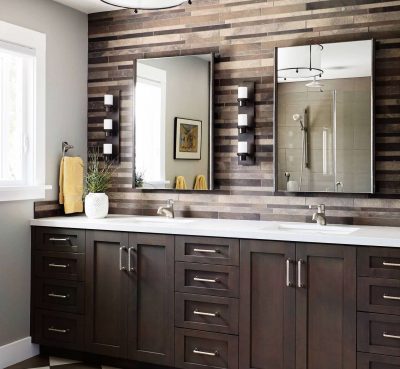 Is Shower Water Safe to Drink?

How Can I Clean My Bathroom Tiles?

What Is the Best Material for a Walk In Shower?

What Is a Doorless Shower? Advantages and Disadvantages